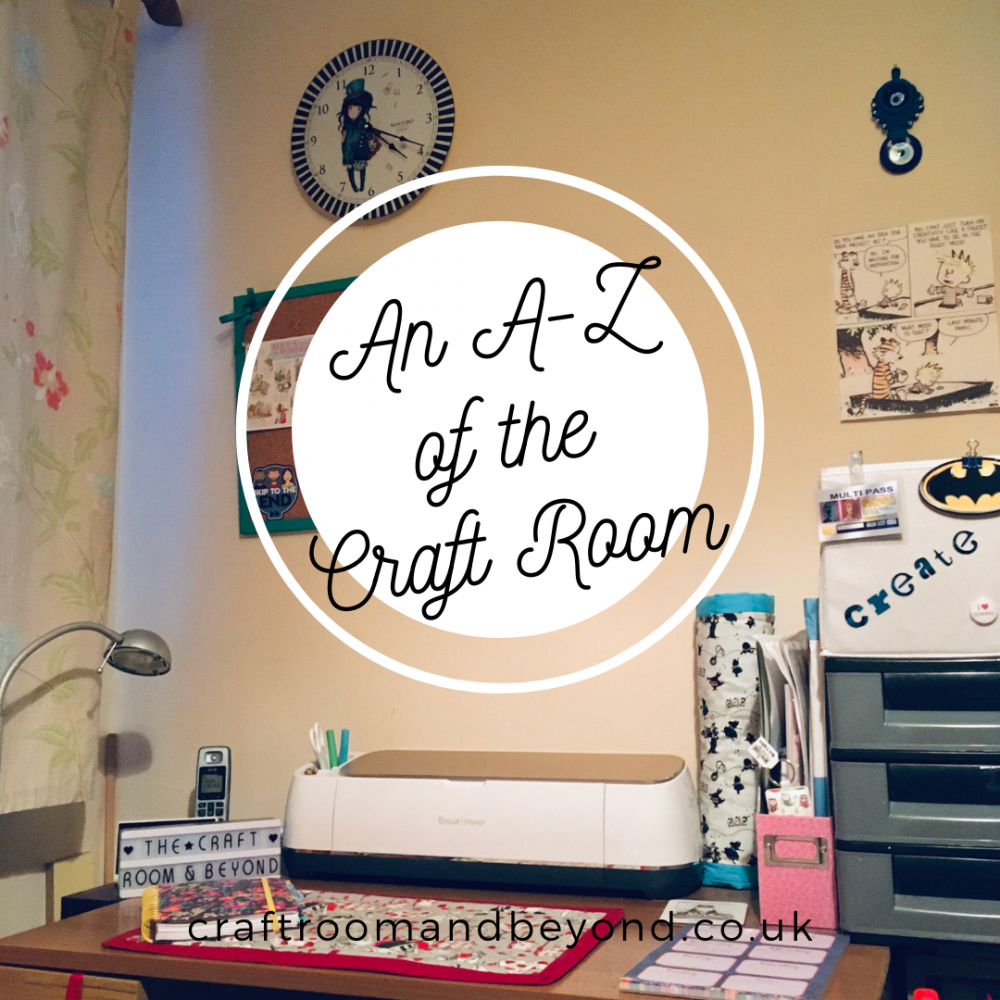 The craft room, my upcycled creative space, my den of crafty goodness, and of course the (very) occasional spare room! Since we’re in lockdown again; I managed to actually have a bit of a tidy and a clear out last month. Considering I did the original A-Z tour two years ago; I thought it was high time to share it again! So here we go an A-Z of the craft room, revisited!

As I said in the last one of these, this is just a bit of fun, a bit of a tour and who knows; it might give you a little more insight into me, if you’re new to the blog, or just feeling nosy!

An A-Z of the Craft Room Revisited

You can read the original A-Z craft room tour in this post.

In this post, as much as the theme is revisiting, the list is still the same, though some items may or may not have changed!

A – Alice in Wonderland

The Alice thing wasn’t going to go anywhere! I am still debating on making a new cushion using Alice themed fabric, just to add more Wonderland to the space!

I’m trying to read more, though as ever the books in the craft room, are more the “odd” ones, as well as craft books and photo albums!

I did a whole post on the upcycled craft cupboard, ages ago. It’s still very much in use, and even got a bit of a tidy recently! It’s great for keeping my stash organised!

The original Disney shelf is no more! But all my Disney stuff is now in two box shelves, still in the craft room! Part of me is wondering if I need more shelves!

As well as my love of Alice, I still sort-of collect Snow White stuff, but it’s been a while since anything was added to the shelves!

E – Everything to Hand

In the last post, I said I wanted to replace these drawers;

I still do, but NOW there is a plan! So that’s a “coming soon”! I also moved some of the things on the desk… and of course, er, there is a computer there now.

This room is very much somewhere for a lot of things to live. But among the crafting, there are some personal mementos, pictures, photo albums and more can be found in here. I covered this in the initial a-z of the craft room, if you want to see more!

I still have a great love for Santoro’s Gorjuss, I even use this craft wrap for my pens now! It hangs up, which hasn’t been necessary, but you never know!

The hammock is still there, it needs a sort out, I may or may not have too many cuddly toys, and they have strayed a bit…

What I love about having a craft space is how much I can have to hand, and on display. As well as of course; somewhere to store everything, because when you do as many crafts as I do, that’s pretty important!

This is my room. While the door is rarely closed (unless I’m trying to keep the cats out!) it’s very much my personal space, and it’s really nice to have somewhere I can come and sit and just get on with things sometimes. Though I will admit, I do most of my crafting sitting on the sofa watching something on the TV.

This hasn’t really changed much, though with the addition of the computer in there, last year during lockdowns Stu did use the room for online college work.

My knitting supplies all tend to live in the bottom of the craft cupboard, though I do have a project bag with whatever I’m working on as a main project, in the fitted cupboard.

Nothing has really changed, I still have a variety of lamps and lights, both novelty and useful… It’s still a reasonably dark room, but we have also had the hedge removed from outside of the window, now; which will help with the natural light!

I’m a huge movie fan, and that has of course spilled over into the craft room! You can spot all kinds of things in here, I shared the bookshelves before, so here is another area of the room!

This was a really fun project, which you can read about here. I needed somewhere to keep things, though at the moment it’s still pretty clear, as I’ve tidied. Also I think it’d be great for photography potentially, and it’s far better than the notice board being sat in a corner not being used! I also love how upcycling it with a bit of paint brightens up the room!

Because this is very much a handmade and upcycled space, there are bits that aren’t finished. I have plans for replacing my stationery drawers now.

Last time I wanted to clear the messy corner, and this has now been replaced with this:

There are a LOT of cupboards and drawers in here now…

None of my paper storage has changed! I have a plastic drawer tower for most of my papers, and a smaller unit for smaller paper blocks, that also acts as a rest for my laptop! Though I am very much still trying to work from my stash, so it’s getting a little more thinned out, it’s organised if nothing else!

I ended up swapping rooms a couple of years ago, as this room is on the adjoining wall to the neighbours house. It’s a room I try to keep fairly quiet, while I’ve been known to play music on my laptop, I’m not usually in here very late.

It’s nice to keep it as a chilled space too.

I wanted a rocking chair for years. I don’t even really know why! So it’s there, still not doing much, and kinda taking up space… I wonder if I should actually get rid of it, but I sort-of like having it!

I still keep fabric in boxes on top of the craft cupboard, and the sewing machine sits in the corner. Of all of my crafty bits the sewing stuff is the most spread out, but this is hopefully going to change by the end of the year, with a bit of a whole-house rearrange!

There are several mugs in the craft room (decorative mostly!) And there’s usually another one on the desk! I’m never too far away from a cup of tea! I love that this is a-z of the craft room revisited, but this is exactly the same. You can’t expect me to change that much in two years!

I love the upcycled nature of this room. It’s functional, but quirky and is in itself an inspiring space. That being said; it means it’s always a work in progress! Of course there are parts of the room which are bought for purpose; and there will inevitably be more; but so much in here is incredibly functional considering it’s not the original intended use! From my pen holder, to my desk!

The idea when creating this room, was that it is a versatile space. There are things that have to leave the room for people staying in it, but almost everything tucks away, or fits into a corner. It means I can work on a variety of projects and crafts in the same space, which is obviously really important!

I love my purple cubby holes, and in fact they are wine racks! Saved from skips, I have two, which are slightly different heights, one used to live ON the desk, but now lives beside it upright, the other is here;

It is very much as before, but now has my Cricut and more decoration on it, instead of my Disney stuff.

My cross-stitch supplies used to be in one big box; now it’s been gradually lessened to a couple of shelves in my cupboard. It feels SO much more organised, and I know where everything is now! I work on less in terms of stitching so this is slowly becoming a smaller stash!

Ah A-Z of the craft room revisited goals…. This is fun – what I wanted to do:

As you saw above, I replaced the Disney shelf with the box shelves, and of course the cupboard in the corner became home to the printer (it has a shelf) and meant it is FAR tidier… The drawers is still yet to come, but actually happening SOON!

This room doubles up as a spare room, on the very rare occasion we have a single guest. We do also have a sofa that folds out too, but it’s nice to be able to give someone a space of their own. So if it’s only one person I move things around a little bit and this room becomes a quite nice guest room.

Unlike before when the bed sat visible at the side of the room, now it is tucked away in a cupboard, and reasonably easy to retrieve… Though there is storage going on in there too!

I hope you enjoyed the tour with a difference, the A-Z of the craft room revisited! It was fun to look back on an older post, and really compare how much things have changed!

This room is always very much a work in progress! Feel free to ask me anything if you want more information, I can try my best to remember where things are from etc, I’m usually around on Twitter if nowhere else!

Do you have a crafty space? What would your dream space be like?

2 thoughts on “An A-Z of the Craft Room Revisited”